Organic growth at 4.3% for the nine-month period

“Saint-Gobain continues along its growth trajectory despite a tough comparison basis in Q3 2017. Our focus on increasing prices – critical in an inflationary environment – continues to pay off. The industrial issues that had weighed on our profitability in the first half of the year are largely behind us.

Saint-Gobain is therefore confirming its objectives for full-year 2018 and for the second half expects the like-for-like increase in operating income to be clearly above the level achieved in the first half.

The strategic initiatives announced in July are moving forward; they will help accelerate the Group’s profitable growth momentum. This new organization will be outlined in a specific announcement on November 26th.”

The negative currency impact was 3.6% over the nine-month period, with a smaller 1.9% negative impact in the third quarter resulting mainly from the appreciation of the US dollar against the euro, despite the ongoing depreciation of the Brazilian real, Nordic krona and other Asian and emerging country currencies.

The smaller Group structure impact in the third quarter (+0.6%) reflects the acceleration in the Group’s portfolio optimization program, with in particular the disposal of the EPS insulation foam business in Germany and glazing installation operations in the UK. The Group has also launched a process to sell the legal entity of its Pipe business in Xuzhou, China. It should be noted that in light of the now hyperinflationary environment in Argentina, this country which represented less than 1% of the Group’s 2017 sales, is excluded from the like-for-like analysis as of July 1, 2018.

On a like-for-like basis, sales were up 4.3% over nine months and 3.1% in the third quarter. This reflects a further acceleration in pricing, up 3.5% after a 2.5% rise in the first half, in a context of continued raw material and energy cost inflation. Volumes were up 1.4% over the nine-month period, and remained almost stable in the third quarter (down 0.4%), affected in particular by a high comparison basis in High-Performance Materials and Exterior Products in the US. 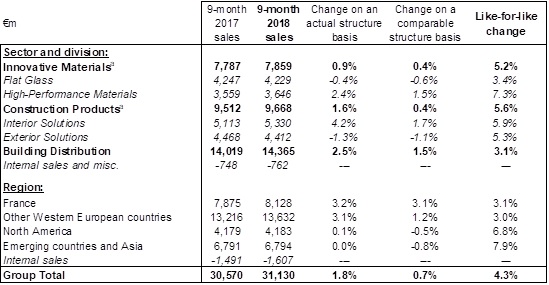 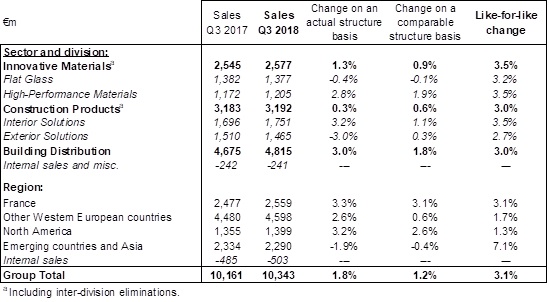 Innovative Materials sales rose 5.2% over the nine-month period, including 3.5% in the third quarter.

Construction Products (CP) sales were up 5.6% over the nine-month period, including an increase of 3.0% in the third quarter.

Building Distribution like-for-like sales advanced at the same pace in the third quarter (3.0%) as in the first half, rising 3.1% over the nine-month period. France delivered a good quarterly performance, and the Nordic countries continued the good trends seen in the first half of the year. The UK reported further growth, still driven by a strong price effect despite declining volumes. Germany and Brazil were down over the third quarter.

Saint-Gobain continued its pace of small and mid-sized acquisitions during the third quarter. Over the nine months to September 30, 2018, the Group acquired 17 companies for a total amount of €561 million. These acquisitions will enable Saint-Gobain to:

The additional strategic initiatives intended to accelerate the Group’s transformation are moving forward. They involve in particular:

The Group confirms its action priorities for the year as a whole:

- Announcement of the new organization: November 26, 2018, before open of trading on the Paris Bourse.