“The third quarter confirmed the upbeat trends seen in the first half excluding the impact of the cyber-attack. All Business Sectors and regions advanced, including France. We continued to see a good price effect against a tougher basis for comparison, but not yet sufficient in all of the Group’s businesses given the more inflationary raw material and energy cost environment. The Group continued to focus on its strategic priorities, signing 23 acquisitions since the beginning of the year, including the recently finalized Glava deal.

Saint-Gobain confirms its objective for the full year 2017 and expects the like-for-like increase in operating income for the second half to be above the level achieved in the first half despite ongoing inflationary pressure on costs.”

The 0.8% positive Group structure impact essentially reflects the consolidation of acquisitions made in Asia and emerging countries (Emix, Solcrom, Tumelero), in new niche technologies and services (H-Old, Isonat, France Pare-Brise), and to further strengthen our positions in Building Distribution (particularly in Nordic countries).

Currency movements had a 0.7% negative impact over the first nine months of the year, with a significant 2.2% negative impact in the third quarter primarily due to the depreciation of the US dollar, pound sterling and certain Asian and emerging country currencies against the euro. 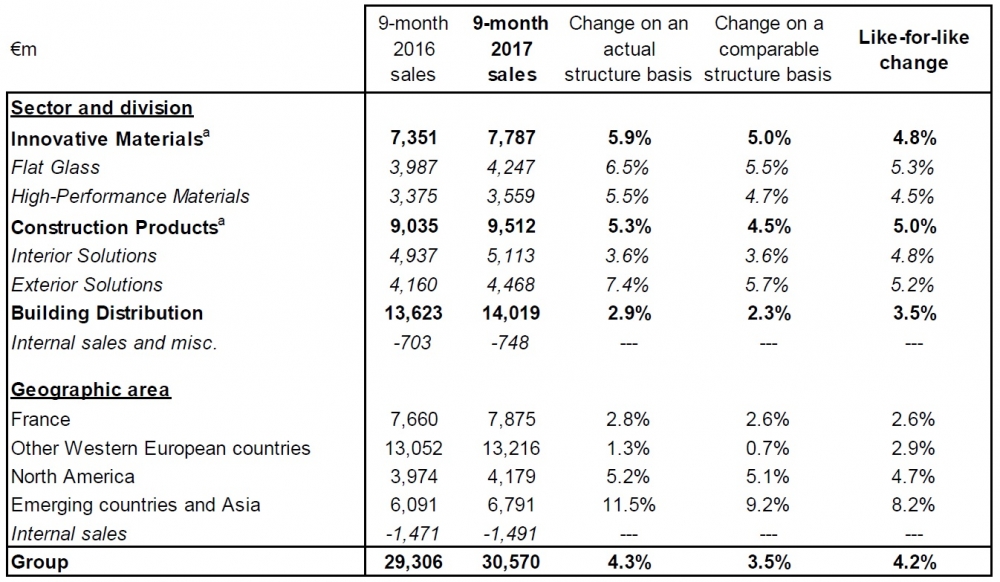 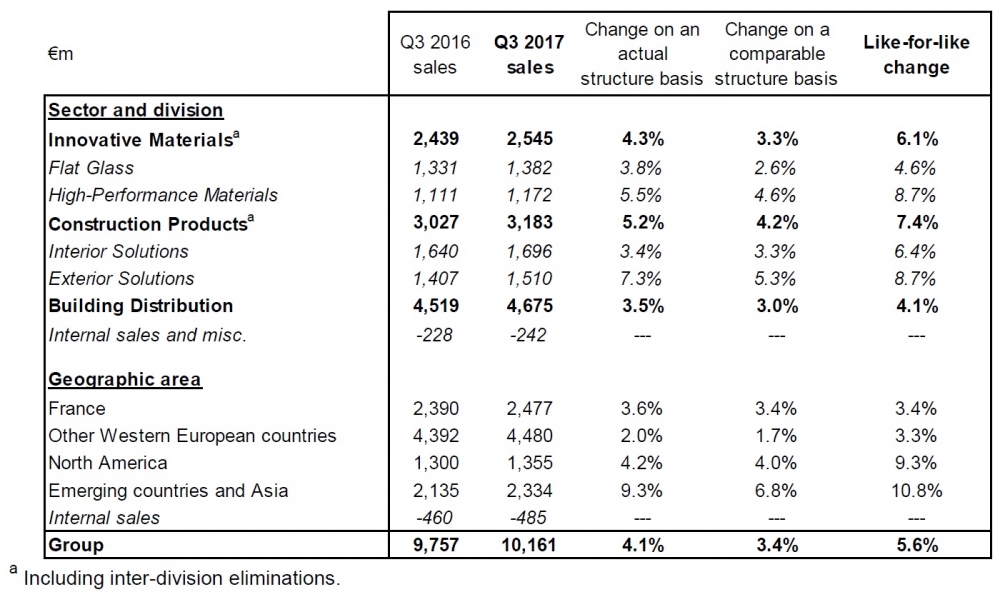 Innovative Materials sales climbed 4.8% over the nine-month period, including 6.1% in the third quarter.

-  Flat Glass delivered further good organic growth in the quarter, at 4.6% (5.3% for the nine-month period). The automotive business continued to report good volume growth in all regions, despite a less favorable mix effect compared to the first half. Sales linked to construction markets remained at good levels across Western Europe, with float glass price trends stabilizing and higher prices for transformed glass; Asia and emerging countries again performed well although we expect a negative impact from the earthquake in Mexico which affected our facilities.

-  High-Performance Materials (HPM) sales rose 8.7% over the quarter (4.5% over the nine-month period), driven by all regions and businesses, particularly Ceramics which was boosted by exceptionally strong sales of refractories during the summer.

Construction Products (CP) sales moved up 5.0% over the nine-month period and 7.4% in the third quarter.

-  Interior Solutions delivered 6.4% organic growth in the quarter (4.8% for the nine-month period), buoyed by healthy volume trends in Western Europe and in Asia and emerging countries. Trading in North America remained stable but with a smaller pricing contribution in a more competitive environment. The price contribution for the division as a whole remained in line with the first half, but still lags behind the rise in raw material and energy costs.

-  Exterior Solutions sales rose 8.7% in the third quarter (5.2% over the nine-month period), led by Exterior Products volumes which benefited from a more favorable basis for comparison than in the second quarter and from additional weather-related demand in the US in a competitive price environment. Pipe saw its prices gain ground amid continued strong inflation in raw material costs, while volumes remained affected by the lack of major export contracts. Mortars put in a good quarterly performance in its main regions, despite the Brazilian construction market remaining difficult.

Building Distribution sales rose 3.5% over the nine-month period and 4.1% in the third quarter, in line with first-half trends excluding the impact of the cyber-attack. Trading in France continued to recover, driven by good momentum in new-builds and the first signs of improvement in renovation. Nordic countries as well as the Netherlands and Spain continued to benefit from good market conditions. The UK reported further growth despite an uncertain environment, while Germany was down slightly. A difficult construction market continued to affect Brazil.

-  France continued to improve during the quarter, up 3.4% (up 2.6% over the nine-month period), buoyed by dynamic new-build activity. Renovation showed the first signs of improvement in the quarter.

-  North America reported 9.3% organic growth over the quarter (4.7% over the nine-month period). Construction volumes continued to trend well, helped by additional weather-related demand; industry was up overall. Pricing slowed amid a tougher basis for comparison and a particularly competitive environment.

-  Asia and emerging countries reported further good growth in the third quarter, at 10.8% (8.2% over the nine-month period), driven by all regions.

The Group continued to focus on its strategic priorities, with 19 acquisitions signed in the nine-month period and 4 finalized in October alone, including Kirson, Megaflex and Glava. The acquisition of the entire share capital of Glava, the insulation market leader in Norway, allows Saint-Gobain to consolidate its positions in Nordic countries.

Pursuant to the agreement between Saint-Gobain and the Burkard family relating to the sale of the shares of Schenker-Winkler Holding (SWH), which holds the majority of Sika voting rights, Saint-Gobain exercised its option to extend the validity of the agreement until June 30, 2018. Saint-Gobain will then have the option to further extend the agreement up until December 31, 2018. This further extension of the sale agreement once again reflects the alignment between the Burkard family and Saint-Gobain and their unwavering determination. The transaction makes strategic, industrial and financial sense for Saint-Gobain and for Sika, for their employees, for their customers and for all of their shareholders. Given the recent appreciation of the euro against the Swiss franc, Saint-Gobain has adapted its acquisition hedging strategy to fix the potential net gain at around €70 million. This is no indication of the future hedging strategy, which will need to evolve in line with market conditions.

-  continued upbeat trends overall in other Western European countries, despite less visibility in the UK and Germany still hesitant;